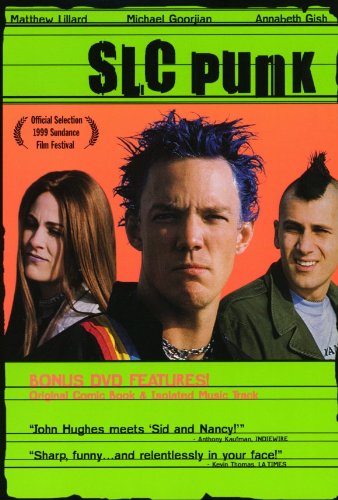 Ah, my metaphorical mohawk is spikey and brutal right now. SLC Punk reignited the Rude Boy in me and I am ready to fucking rock. I’m want to tattoo middle fingers on my face and tell the whole world to kiss my ass. Of course, I definitely won’t do that because I’ve completely Bought In. But I feel it deep down in my poser soul.

SLC Punk is a 1998 indy film written and directed by James Merendino and starring actors who would go on to bigger things (Matthew Lillard, Devon Sawa, Jason Segal, Christopher McDonald), as well as ones that will live forever in these singular roles (Michael A. Goorjian, Annabeth Gish, Til Schweiger). Honestly, these one-off actors make this movie feel more real. Like they are real people who existed within this niche scene.

Needless to say, the soundtrack for this movie kicks all kinds of ass. Make sure you download the episode now, because if we’re ever going to get sued, it’s this one. But fuck it, that’s what being punk rock is all about. Fuck the man, fuck the system, fuck conformity, fuck the government.

Once you come off of your anarchist high, hit us up on twitter @recastingpod and tell us what classic punk songs I should have played instead of the ones I did. Leave us a 5 star rating on any app you download our show for no other reason than we told you to, but also because this show is awesome. Finally, we may be anarchists, but we want to make sure your voice is heard, so email us at recastingpod@gmail.com with any movies you want us to recast or guests you want us to try to get on the show. We’ve got some fun stuff planned for the near future.