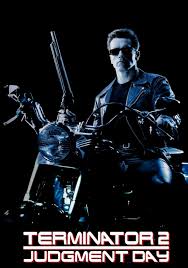 Terminator 2: Judgement Day was one of the biggest blockbusters of my childhood. Starring Arnold Schwarzenegger , Eddie Furlong, Linda Hamilton and Robert Patrick. Directed by James Cameron, this movie made ALL of the money, and it apparently had the largest opening box office weekend until dethroned by The Matrix Reloaded 22 years later. The rewatch itself was interesting. We had different takes watching it after all this time. I really enjoyed it, and thought it held up. Mike…not so much. We have a lot of fun with this one, so we run a bit long.

The production of this movie was really interesting. Legal battles, injuries on set, technical limitations all plagued the production, but it eventually all came together for a really entertaining film. Read some of the behind the scenes stuff, and you’ll see. For example, Billy Idol was the first choice for the T-1000 role. Needless to say, he did not make either of our lists.

This movie was known for its CGI effects and while some of them haven’t aged well, there are others that still worked nicely. There was apparently a lot of post work on Eddie Furlong’s voice, because the production was so long, he was going through puberty. Maybe that is the reason on why his voice is so squeaky. Cameron does a good job of mixing the CGI with practical effects. This was a serious leap in the technology and the scale of action films. Michael Bay was definitely taking notes.

We’d love to hear from you! If you want to send us your picks and spiral into a neverending argument over them or if you just want to give us some feedback, head on over to our twitter @recastingpod, check out our Facebook page, or email us at recastingpod@gmail.com

Link to Amazon
Link to IMDB